Workplace Thinking Has Been Altared

Interviews with workers at all levels of the corporate or nonprofit ladder demonstrate that satisfying work has little to do with job description and almost everything to do with choosing to find more meaning and satisfaction in any task. 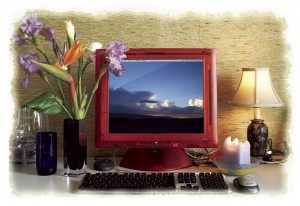 Here is one of Pat Sullivan’s 26 practical columns on that topic for the San Francisco Chronicle or its predecessor, the Examiner & Chronicle. Those columns led to the publication of Pat’s book, Work with Meaning, Work with Joy: Bringing Your Spirit to Any Job (Sheed & Ward, 2003).  This piece has been republished by the American Bar Association in J. Kim Wright’s best-selling book, Lawyers as Peacemakers: Practicing Holistic, Problem-Solving Law.

In 1976, I accidentally discovered that many workers keep spiritual items in their desks. While seeking correction fluid at a temporary job, I found a book on Buddhism and a Bible. At another desk, an inspiring quote on beautiful paper fell from an expense file. During hushed conversations, co-workers shared what they hid in their desks.

Today, spirit has come out of hiding places in desk drawers and onto the desk tops. Some workers select and use devotional items with such care that they create altars.

Altars are a natural response to the need for respectful reflection wherever we are — at home, in a temple, in the woods, at work. They can last many lifetimes or be temporary and spontaneous.

Because of business practice and labor laws, workplace altars need to be discreet. The underground workplace of Patsy Attwood, a station agent for the San Francisco Bay Area Rapid Transit System, is an example. You could walk by and never notice how she has altered her space to integrate faith and work.

Attwood’s glass-walled booth is enlivened by plants and flowers. Whenever she enters her space, she blesses it. On her phone console, a prayer she wrote helps her live her values moment to moment.

Attwood’s inner work helps her deal better with job stress, like an angry customer whose ticket wouldn’t work. “When he approached me with an eat-you-up attitude, my stomach instantly jumped,” she said, “like it does in an earthquake.”

As the man stepped closer, Attwood prayed, “Lord, help me.” Inner turmoil turned to peace. She then dared to ask, “Why are you talking to me this way? I want to help you.” Surprised, the customer relaxed, and she fixed his problem. Later, he sought her out. “I don’t know what you did, but after I talked with you,” he said, “my day was great.”

“Whatever we put in our workspace can have a profound affect,” says William S. Johnson, a Santa Fe businessman. He notes that many executives have “ego walls” filled with photos and trophies designed to impress people. Others use their space for enrichment. “Sometimes altar artifacts provide a nice icebreaker to initiate conversations between strangers.”

Johnson keeps a Bible at his desk and uses it often, but he has never seen a religious text on anyone else’s desk. “I see more religious symbolism in New York City taxicabs than I ever see in corporate offices.” That, according to managers and labor lawyers, is fitting. If having spiritual items at work helps employees be less stressed and more productive, employers often say that’s fine. Practices that interrupt business are not okay.

Most employees agree that their right to practice spirituality at work is balanced by other employees’ rights to practice different values. An unspoken etiquette is evolving: in private space (desk drawer or a section of the desk that faces away from visitors), it’s usually acceptable to place small symbols of a particular faith. In more public space, including office walls and desk sections that face visitors, employees need to be extra careful not to make others uncomfortable.

Many workplace altars begin instinctively. During a hard time, Brenda Fuller, a Washington, D.C. legal secretary, placed a prayer she loved by her telephone. Later she added a photo that makes her laugh and a quote by Goethe to go boldly towards her dreams. Tiny frames filled with prayers graced her computer monitor stand.

People on the go also have altars. Inside his locker, a firefighter posts meaningful words and pictures. A meter maid keeps devotional materials in her truck. So does a carpenter, who also blesses his tools and each task.

While attending conferences and seminars in florescent-lit buildings, publicist Kathryn Hall builds a mini-altar of leaves, a bit of moss, or other natural items that draw her attention as she walks to the site. Each day the altar grows, often because fellow attendees add to it. Afterwards, Hall returns each item to its setting with a prayer of gratitude.

The PBS documentary “Jane Goodall: Reason for Hope” shows ecologist Goodall carrying four symbols of hope wherever she goes. A leaf from a tree that survived the atomic bomb in Nagasaki speaks to the restorative power of nature. Chunks from the Berlin wall and the South African prison where Nelson Mandela and his comrades were incarcerated call forth the power of the human spirit to overthrow injustice. A stuffed toy chimpanzee, touched by attendees at Goodall’s workshops, spreads laughter and hope among people throughout the world.

The documentary didn’t use the word “altar,” let alone “workplace altar.” As Goodall spoke about each symbol, however, faces in her audiences glowed. There was reverence not for the items themselves, but for the spirit they evoked, and that’s what altars everywhere are about.

copyright 1999 by Pat McHenry Sullivan. www.visionary-resources.com.  All rights reserved.   To request permission to republish this piece, write pat@visionary-resources and putting “request Workplace Altars re-publication rights” in the re” line.